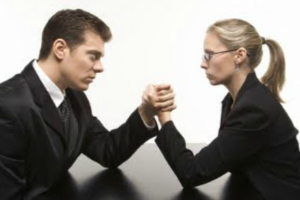 Under both State and Federal law, it is unlawful to discriminate against an employee or an applicant for employment by reason of his or her sex or gender in regards to hiring, promotion, compensation, termination, or any other condition, privilege, or term of employment. Employment decisions based on stereotypes and assumptions about traits, merits, abilities, skills, or work performance of certain genders is also prohibited.

Proven time and time again that women have the ability to perform with equal skill and success in anything men do and at any level, which include success in employment, athletics, academics and politics. Yet discrimination against women still lies in the United States, and its passive effects still force to keep women’s salaries lower and opportunities fewer within the employment world. Although, men too can be subjected to unlawful sex discrimination. No matter what form it takes, including unequal pay, discriminatory job standards, or failure to promote. Which numerous federal and state laws prohibit discrimination on the basis of sex. Not sure how to do it? Call us, we’re here to help and answer any questions you have!