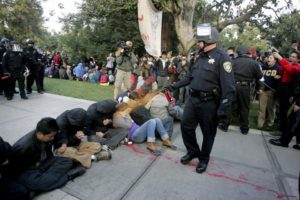 In America, we give the police broad authority to do what is necessary to protect us. Police brutality is a violation of that trust, whether or not you committed a crime. At the Law Office of Courthouse Pitbulls, we are proud to represent people who have suffered physical and emotional injuries as a result of police brutality.

Many people believe that if a suspect was drunk, disorderly, or disrespectful, they deserve what they get. We do not. Police are only allowed to use the force necessary subdue a suspected criminal; even if the person resists arrest or disrespects the officer. Our firm has recovered more than $1.6 million for clients in a wide variety of police brutality cases:

Often of these cases resulted in a criminal suspect facing additional charges to cover up the misconduct of the police. Since the officers need to explain the injuries, they often file false police reports that misrepresent the causes of a suspect’s injury.

Our attorneys have extensive experience examining police reports, finding witnesses, obtaining any police or other recording of the innocent, and interviewing officers that were at the scene. This information often enables us to impeach what the officers wrote in their original police report. It can also provide the evidence we need to file federal civil rights charges as well as charges related to excessive force, false arrest, malicious prosecution, abuse of process, and filing a false report.

Our firm has successfully handled police brutality cases against officers in Staten Island. And we are prepared to represent you.

Contact the Law Offices of Courthouse Pitbulls if you have any questions about filing a police brutality lawsuit. We have offices in Staten Island. Our attorneys can be reached by phone number on the right.